Farm Show of 2016 is history already. It feels like the year of 2015 just started and here we are in 2016! This year is flying by and it just started. It was a great Farm Show week and I am glad that I was able to spend it with the people I did. The week started out amazing because of the rabbit show. All of my rabbits did really well, but one of my rabbits that participated is very special to me. His name is Zo, a Giant Angora. When Zo was born, his mom didn't take care of him and he was the only survivor out of a litter of ten. Zo needed a lot of special care in order to live. Today, Zo is about 10 1/2 pounds and he was ready for Farm Show. I showed him in his class and he won best of breed! As if that wasn't an accomplishment in and of itself, he went on to win Reserve in Show! That means that he placed second of all the others shown in all the breeds in the youth show! I am so proud of him.

On Saturday, the opening day, I started by participating in a sheep skill-a-thon. In this skill-a-thon, it was my first year competing and I wasn't really sure how I was going to do. I am proud to say that I placed 8th in my category! After the sheep skill-a-thon, I participated in rabbit showmanship. I was really nervous because it was my first time in the senior division and I was using Zo for the first time as well.  Normally, I participate in showmanship with a smaller American Fuzzy Lop.  Even though I had those things pondering in my mind, I still went up and tried my best. I waited in suspense until I knew how or if I placed. They announced the senior category last starting with 5th place and as they worked their way to first, I could hardly believe when they announced my name as the first place winner! I couldn't believe it and my mom even shed some tears! I was thrilled!

Sunday consisted of a lot of presentations in the rabbit room.  Also, checking in with mom at our Blue Mountain Farms booth, which did very well throughout the week.  Sunday led into Monday very quickly.  On Monday, I spent most of the day in the rabbit room trying to promote PaSRBA, Pennsylvania State Rabbit Breeders Association, as best as I possibly could and I also participated in a demonstration about the fiber aspect of rabbits.  I also volunteered in a 4-H Information booth on Monday.

Tuesday was fulfilled with Potato Judging in the morning.  Yes, I did just say potato judging, who knew?  I participated in that contest with a team of three from Dauphin county.  I was very proud of my team because we placed fourth and it was only our second year!  Tuesday night was spent packing up and preparing for Wednesday's Fleece to Shawl and Sheep to Shawl.  Of course that was the night that it snowed as well.

On Wednesday, we started very early and ended very late.  We had three youth teams participating in Fleece to Shawl and one adult team in Sheep to Shawl.  My team's theme was the 80's since that was the year that the Sheep to Shawl was first held.  We built on the theme a lot.  Our team's name is the Twisted Sisters so we incorporated that a lot. The other teams had themes of mermaids and lanterns.  We all did very well and I am proud to be a part of Tri-County 4-H Fiber Artists club.  My team finished with only three minutes to spare!  Sadly, we were five inches short so we placed last, but we also walk away with the weavers and overall spinners award!  Also, our shawl sold for $1,650!  We were proud of how we did and we are already talking about next year.  I am also so, so proud of my mom and sister's team.  They finished and did very well too!

Thursday came and went.  In the morning, I showed my sheep, Queen Bee and Queen Polly.  I thought that they did very well.  I didn't place very well because the judge wasn't judging them on their wool, he was judging them on meat  which is not their primary use.  We did the best we could and that's all that matters.  That night, I also helped usher at the rodeo for a fundraiser for 4-H Exchange club.  I had a great time and I even was able to watch a little bit of the rodeo!  I hope next year, I can sit down and watch the whole rodeo.

I couldn't believe it, but it was Friday already!  With Friday, came the Open sheep show.  I showed my two sheep and it was the same story on Friday as it was on Thursday.  The Judge was looking for more size and structure, but it's okay, I had the chance to walk around and enjoy the day then.  I walked around with some friends and I had  good time.  Once the evening rolled around, I participated in the Angora Palooza.  Angora Palooza is an event much like the Sheep to Shawl, but we use rabbits instead of sheep and we construct scarves instead of shawls.  This was the first year that we held this event so we only had four teams.  Since we had four teams, we thought that it would be a fun idea if we used the four seasons as our themes!  I served as the weaver of the spring team.  All of the teams finished in time and my team placed second!  Tyler, my brother, was the auctioneer of the scarves and he did a wonderful job; he even set a record!  The Angora Palooza was a very fun event and I hope we have it next year so it can grow.

We blinked and it was the last day, Saturday was here!  I spent the morning in the rabbit room.  I was sad that it was the last day already.  I wished that it was a little bit longer, but at the same time I was glad that I didn't have to wake up early and I could stay at home.  It was crazy that night because we had to load up and get everything together plus, Tyler, Ashley, Matt, and I all had to usher at the rodeo.  When we went home, mom made dinner for all of us, and we had a Farm Show after party.

Some of the best things come when you wait. I have wanted a puppy for a long time now. I wanted a puppy to teach agility and have as a friend. I've asked and asked and asked and asked when finally, mom said, "We will go to a shelter to look into adopting a dog after Farm Show."  I was okay with that, so I started looking at dogs available in shelters. I found one dog. His name was Dino, a Border Collie Labrador Retriever mix.  Right away told mom about him and we started filling out the adoption application for him. I was really hopeful about Dino. Once we finished the application, we sent it in. I emailed the place that he was housed and asked what his story was. They emailed back saying that he was a stray found in Georgia. They also said that they did not receive our application so they sent us a different form we started to fill out the form, but at the bottom, it said,"All animals on the property that the animal will be kept on need to be spayed or neutered." May I just add, I live on a farm?  So, Dino didn't work out.

About a week later, my mom, sister Ashley, her boyfriend Matt, his mom Deb, and I all went to an open house that Kelly Anderson, the same person who gave me Queen Bee and Queen Polly, my sheep, was hosting. Kelly lives in West Virginia, so we had an early morning start. Once we arrived, we presented her with a gift that was very special to her. Ashley, my mom, and I all worked together to construct a hand knit blanket from animals, sheep and rabbits, that she had given us! We also processed the fiber in the fiber mill! She was thrilled with her gift! After the surprise, we went outside to see some of the animals. Needless to say, I went over to her dogs. She has a breed of dog that are on the conservancy list much like the Leicester Longwool sheep, the Karakachan which originates in Bulgaria. Little did I know, Lily, one of her dogs, was due to have a litter the next week! I was so happy for Kelly! I spent the afternoon talking to her husband, Rick, about how Karakachans would be with agility.  I talked to him for a long time. After my conversation with him, I decided that Karakachans were the breed that I needed to work with. I kept up with Lily on how she was doing and when she was going to have her puppies.

The following week, Lily had her puppies. She had a litter of six and they are all healthy. I contacted Kelly a few times just checking in on them and every time, she would make sure that I knew that there was a waiting list for these puppies. I wasn't too thrilled to hear that, but I was glad that all of the puppies were going to permanent homes. After two weeks, Christmas came around. Every year, we go on a scavenger hunt for our biggest presents. This year, we did one for mom, then Tyler, Ashley, and finally me. I was a little bit confused when mom sat me down in a chair in front of the computer and started to play a slideshow of all of my animal projects through 4-H. Towards the end, there was a picture of Dexter and it said, "Gone but not forgotten." The next picture was a picture of my favorite puppy out of Lily's litter and it said, "Do you have room for me?" I balled my eyes out! I couldn't believe my eyes! I named her Iris and she will be my puppy! I can't wait to get her on January 31st! It's safe to say that I had the best Christmas ever. 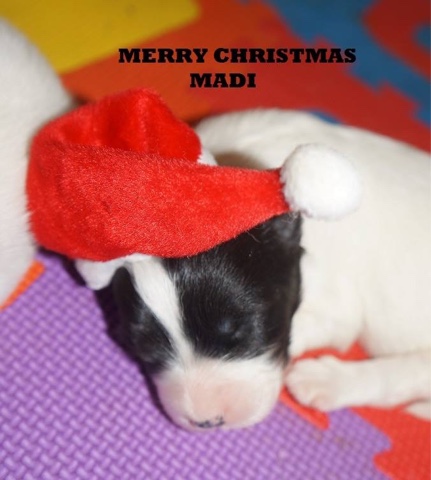 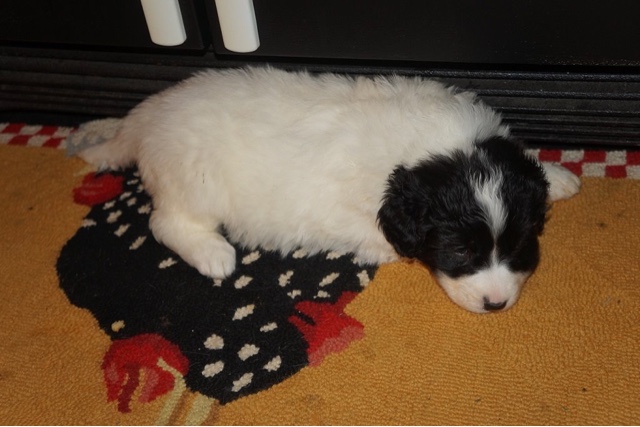 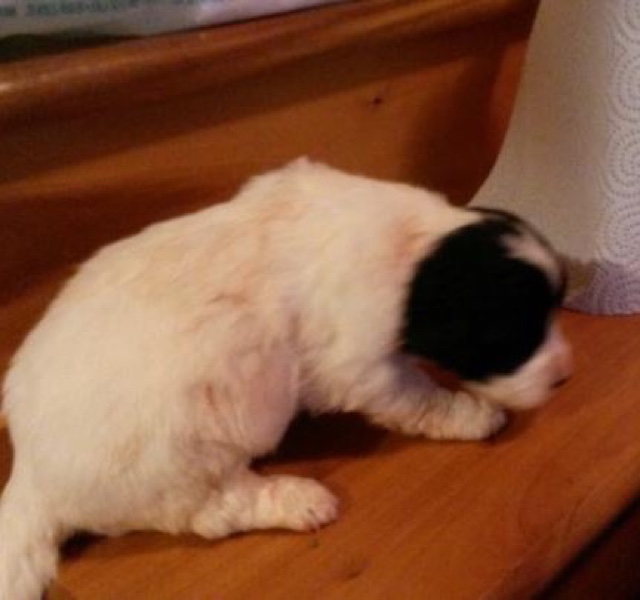 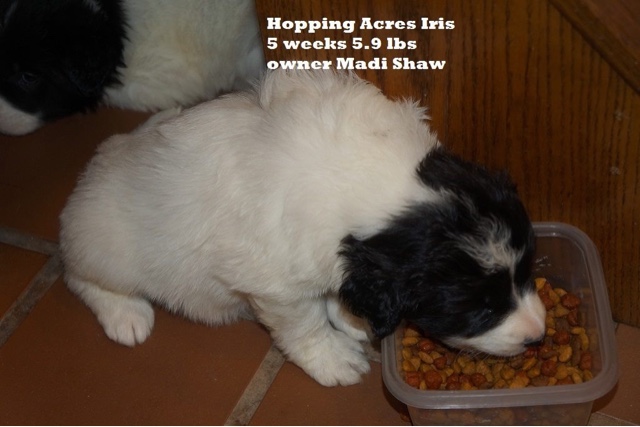 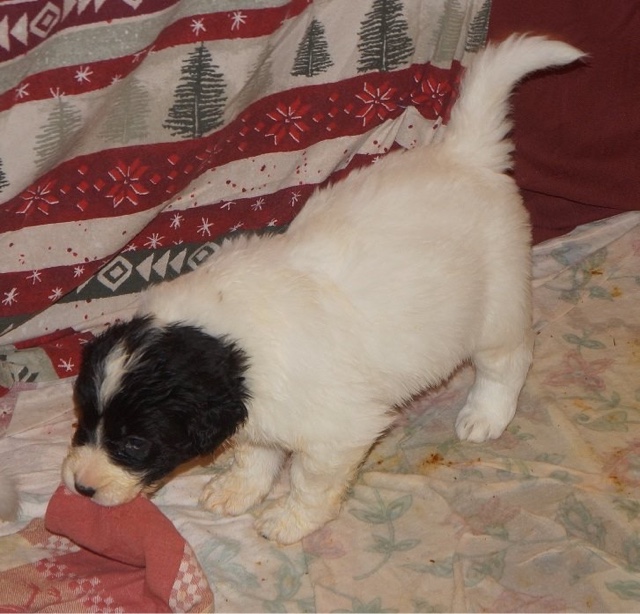 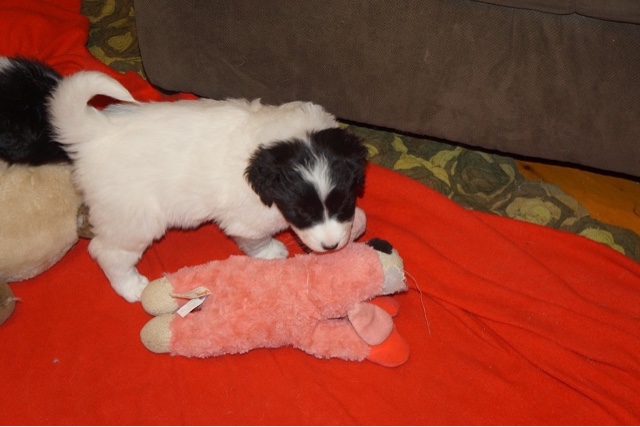 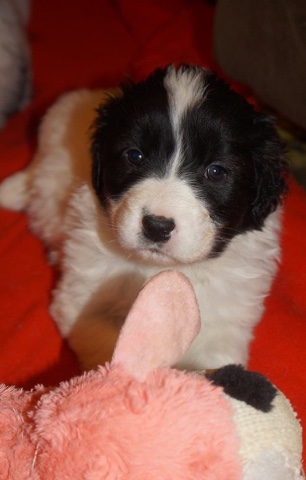 I can not wait to meet her! Just look at her face!